Take a closer look at cemented carbide in additive manufacturing

Call us Email us

In harsh environments, wear resistance is crucial for productivity – and often cemented carbide is the material of choice, due to its combination of hardness and toughness. Designs involving complex geometries, however, have proved a nearly impossible feat... until now. Meet Anders Ohlsson, Lead Product Manager at Sandvik Additive Manufacturing, and explore how Sandvik came to introduce 3D printed components in cemented carbide.

Cemented carbide is one of Sandvik’s most successful composite materials to date. Hard, tough, and wear resistant, it’s a force to be reckoned with in rock cutting, metal cutting, metal forming and other hardcore applications. Now, Sandvik’s patented technology for 3D printed cemented carbide makes it possible for even more industries – and their customers – to benefit from the material’s superior performance and long lifetime.

We let Anders Ohlsson get down to the nitty-gritty of 3D printed cemented carbide to explore its potential. Extensive R&D work lies behind the patented and innovative process – and Anders has been a driving force behind the development of additively manufactured cemented carbide. Focusing on strategy and sales, Anders has the big picture not only of the present – but also of things to come. 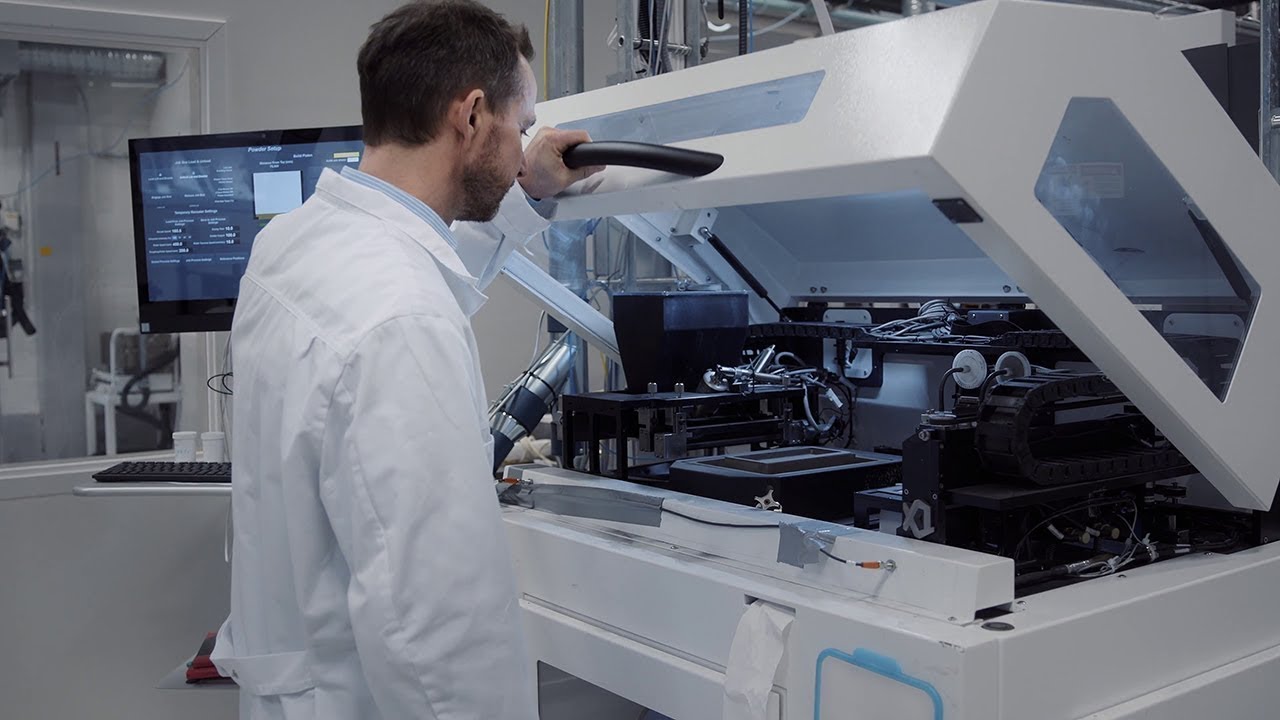 What is cemented carbide, and how is it produced?
Cemented carbide is a matrix material with tungsten carbide and cobalt as its main ingredients. The former provides the material’s hardness and wear resistance, the latter the toughness. Traditionally, cemented carbide is made by compressing a powder under high pressure, into a green body which is then sintered. We instead use binder jet technology – meaning we create the green body by fusing the powder with glue.

Which properties make cemented carbide an interesting material in general?
The combination of hardness and toughness. Hardness is usually connected to wear resistance, but hard materials also tend to be brittle to some extent. In many applications, cemented carbide replaces hard and wear-resistant steel. Cemented carbide components’ superiority means that they, on average, last ten times longer – which means less downtime and lower costs.

What is Sandvik’s history of cemented carbide?
We were definitely one of the early pioneers in the field. Way back in the 1930s, we started trials of cemented carbide for rock drilling and metal cutting applications. During the years since, we’ve continued to expand our knowledge to become the leading manufacturer with cutting-edge expertise and patents.

3D printing, on the other hand, enables complete design freedom

Why is 3D printed cemented carbide by Sandvik such big news?
The conventional method is to press powder using two punches within a die. With this technique you’re very limited in terms of design, since only fairly simple shapes are possible to obtain. 3D printing, on the other hand, enables complete design freedom. You can print basically any geometry, which is particularly interesting as it allows us to create channels for cooling, fluids, or flushing away debris. On that note, I just received a turning insert from our workshop. Only 1 millimeter of the tip is used in the turning machine, and on that tip we’ve added tiny channels – which would’ve been impossible without additive manufacturing. Sandvik is one of the first to 3D print cemented carbide commercially and has invested heavily in the process. With our track record, I'd definitely say it's likely no one has come farther.

Components that look great, work well, and are fit for use in actual applications and serial production

How does Sandvik’s patented process for 3D printed cemented carbide compare to other processes in the field?
The most critical component in our process is to work with powders that have the right properties. Above all, high density brings a whole range of benefits regarding the kind of materials we can produce, and crucially impacts the quality achievable in terms of material properties and geometry. Sandvik has developed both a powder and a process that are unique. Going from commercial powders to our proprietary powders has made a huge difference.

My view is that with commercial powders you can make things that look cool – but you can't really produce anything that actually works. With our powders, we can print components that look great, work well, and are fit for use in actual applications and serial production. For instance, in wire drawing, productivity is usually limited by how fast the wire can be drawn with maintained quality, which in turn depends on the temperature in the wire drawing die. People have been trying to solve this problem for decades, but it’s been extremely difficult. A 3D printed, cooled wire nib is the answer to this riddle. It took a mere four days to produce, from the first basic sketch to the fully sintered product – thanks to our materials and proprietary process.

Which businesses benefit the most from Sandvik’s 3D printed cemented carbide?
A wide range of industries, such as the food industry, agriculture, oil and gas, mining… I could go on forever. It’d actually be easier to rule out segments that aren't relevant.

What are you the most excited about when it comes to the future of 3D printed cemented carbide?
Personally, all the innovative products that will solve problems in new ways. For instance, there’s a nozzle with a specific angle that we struggled with for a long time. I gave it a shot ten years ago, but failed. With our new technology, we succeeded to obtain a bent hole with specific properties in a matter of weeks. Sandvik’s toolbox instantly got bigger. 3D printed cemented carbide opens the door to many application areas where wear resistance is of importance. It's also worth mentioning that we speed up time to market quite dramatically. Prototyping used to take six to twelve months, while our lead time to date is a matter of weeks. The pace of innovation has accelerated, and our engineers are up for the challenge!

Cemented carbide is wear resistant material and lasts up to 20 times longer than any steel or metal alloy – making it suitable for a range of applications.